“I’m an alcoholic. Sometimes I’m tempted to have a drink. — But I never do.”

Dreams are weird. Terribly hard to describe. Maybe easier to make a movie to depict them — or a work of art. 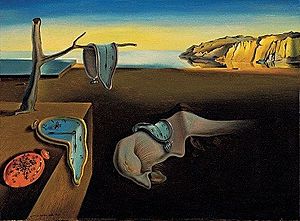 Dali ~ The Persistence of Memory

Movies. She watches far too many of them but they are her way of staying sane — of feeling like she has company — of reminiscing feelings.

Not that reminiscing is a good thing, mind, but seems necessary at this time.

This time she is departed from loved ones — dogs, cats and most all of the people — family or considered family. It isn’t really loneliness. It is missing. Missing Mom’s house to go to and yard to play in while Mom cooks in the window above where she is playing. Missing sissy’s porch to sit on — of having a chat with her. Missing clipping Little Red’s fur coat with scissors and loving her the whole time. Not really missing picking up poop inside the house from Gertie’s accidents, but missing it just the same and Gertie’s sweet blind eyes. Missing seeing Tom at Safeway or at her front gate. Missing arguing with him or sharing agreement on topics of interest over a cup of senior coffee at Wendy’s.

They are all gone as are many of the people around town who have aged out and gone on too — people she had cleaned house or mended clothes for.

The little town is starting to feel too small. The City is starting to behave in ways she is fairly unhappy with. Maybe she is just noticing it because there is so little else to distract her.

She and Tom had talked about pooling resources and moving to New Mexico and whenever he was out on one of his vagabond trips he was assessing the culture and climate of wherever he was with her in mind. She had told him to look for an old abandoned motel with property that she could work on and they could convert to be a bed and breakfast or alternative housing unit. He had thought that might be a feasible idea — one that would be able to keep them still separated enough but meet each of their individual needs as well.

She knows in her heart that he would likely have abandoned her with the project and continued his vagabond habit but it was something that they could talk about and dream of and a way for them to consider not completely separating as he tried to find a way to leave her same town that he had long ago found way too small for his liking.

Tom is gone in the real sense now, and she has invested 16 years into trying to carve out her style of living. Though it seems to be going backwards, it is likely going full speed ahead. Even growing tomatoes has been a challenge, but such is the cycle of life. She had put out poisoned straw by mistake and things might simply be recovering from that. How can she leave it in such a state?

In her little carved out life, she has abandoned many things — TV, a washing machine, flushing her toilet, driving too much. She used to drive all the time whenever she needed to clear the cobwebs of her mind or sort them out. It wasn’t uncommon for her, back in the day, to set out on a driving expedition that would last for hours — maybe to Julian and back just to go and come. Julian was an even smaller town than where she is now but in her mind it had been huge. It had all the things she had dreamed of at one time, including a boy. 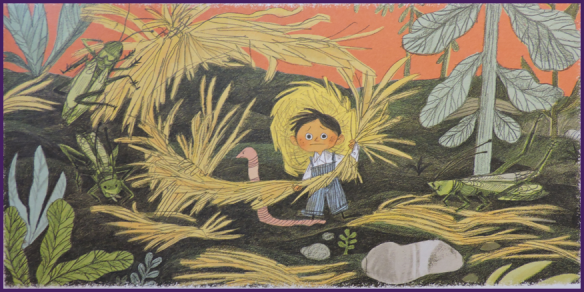 Image from the book, The Little Gardener ~ Emily Hughes

That boy liked horses and trouble and ended up marrying “a wonderful English girl”, who liked horses too, that he’d met while stationed in England. He’d been trying to survive the Air Force without being discharged dishonorably. Somehow the English girl must have factored into that survival.

He’d come home between getting out and getting the English girl moved with her horses from England to his little town. “You never know what might happen in that time.” he’d written in the blue letter.

She’d traveled out to visit him in the in-between time of horses and marriage and before she left he said, “If I thought you might commit suicide, I won’t marry her.”

She cried all the way home, listening to The Doobie Brothers, Black Water.

Years and years she’d make that round, that trek to Julian and back. Often she wouldn’t even stop — just drive through and back home. Once in awhile, she’d get out and walk around — trying to grasp the feelings of why it had all seemed like so much.

“Why had she done that?” she wondered. She figured it was a reminder of her own ability to survive in spite of loving a place or thing or boy. All those years ago, driving home crying, wondering how she’d survive, but she had.

Now to reminisce, because Julian is too far away in space and time, and because she doesn’t drive too much or have TV, she watches movies on DVD. Lately she found one with Tommy Lee Jones and hadn’t heard of it but figured if he was in it, it must be good and it was. Good enough anyway. Good enough to help her remember things she’d thought or thinks she’d like to have had or still have in her little, small town life.

In The Electric Mist, Tommy plays a non-drinking alcoholic detective. He apparently has been married to the same woman for years and has had a happy life with her — things she wishes she’d had or could have.

In the movie, Tommy is given a glass of iced tea that he doesn’t know is laced with LSD. He has hallucinations much like dreams that can’t be explained. The hallucinations correlate to events happening in his investigation, kind of leading him in a sense. Levon Helm plays in it too and he is another one of those people she misses that have gone on except in her mind or in a movie.

Her dreams lead her too. What are dreams except for the mind’s way of coping with or correlating life’s awake events?

Movies can be very much like dreaming. Movies suffice to bridge spaces left by boys who married girls with horses and the newer ones who fail to follow through or are yet to come. They help manifest the feelings of old of how the dream was schemed and attempted to be mapped and of a course that may still be able to be kept, with or without a boy. Of course, all the while waiting she hasn’t really been waiting.

Today on her walk she thought and thought like always. When she started out from home, it seemed so far away to the finish line, like so much drudgery.

We start out life that way, thinking things are so far away — like Christmas as a child, waiting for the next time Santa comes. Before we know it, we’re out of high school and upset about a boy who married an English girl. Suddenly we’re retired and walking up the last leg of a two-mile trek around a small town we feel stuck in and that boy divorced that girl in a few short years and who knows what he’s doing now.

She had been walking with her head down, watching her feet like in a trance when suddenly she looked up. It was the last little leg and up a steep hill. It was so gorgeous. The wild shrubs were gleaming, some with flowers already, in the back light of the Sun. The sky was crystal clear and blue as blue can be. The air was crisp, just right. She’d been looking at her old sneakers and the crummy old concrete beneath them all the while she could have been looking at the beauty before her. Of course she hadn’t been looking at her feet all along — but trying to get that last leg done and finally home, she had forced herself to focus in a methodical, mechanical way. It was starting to feel like drudgery.

She kept thinking about that movie and how Tommy’s character quit drinking and stayed sober. His friend, on the other hand had continued to drink and spent his life in misery. Being drunk is just another way of wishing life away.

Now when she checks out at the grocery, while everyone behind her is fidgeting and grumbling and wondering why the manager doesn’t put more cashiers in their stations so they can hurry off to somewhere, she tells the cashier, “No hurry, no worry.” She can see that they are stressed. “How is your day going so far?”

All too often one will say, “Oh, thank God it’s almost over!” She remembers feeling that way and of wishing time would pass and she could leave to be herself and not some robot drudging along.

“Why did you try to start a business when your house was bought and paid for?” her friend asked lately. The friend who spent over 30 years in the same County job, most of it drinking or drunk.

“I wanted to be Me.” she answered. Her friend still couldn’t get it. “Yeah, but your house was bought and paid for.”

“My payment is way less than your rent.” she reminds. “And a landlord can’t force me out or increase the rent. He can’t tell me not to have pets or dig in the yard. I can paint my walls any color I want and the interest is deductible.”

“Yeah, but your house was bought and paid for.” she imagines her friend is still thinking.

She doesn’t often wonder about that boy from Julian — as important as he was. She does sometimes wonder how she pulled herself away, as much as she wanted to stay. It was simply that her intuition was stronger than the inebriation and self-preservation had taken over.

“Old Black Water”, drunk on love she would remember it as. Puppy love.

She’s glad that she didn’t get more of her father’s drinking genes but got a healthier dose of the sober ones of her mother. “Do people have a choice on getting drunk or staying sober?” Her father didn’t seem to.

Dreams, movies, memories, are they means of escape or a way to keep on rollin’?  Seems it depends on the user. “Mississippi moon, won’t you keep on shinin’ on me?” She’ll keep using that memory for healing. That boy, he was a good thing. He was her first lesson in being strong.

That’s why she had liked to drive to Julian. It was a way of remembering strength. Digging in the dirt of her mother’s yard is just a movie in her mind now, it is a reminder of the days of planning and scheming to have a yard of her own and of how strong she had been to get there and comforting to remember the support her mother gave along the way.

“The only things in this life that you really regret are the risks you didn’t take.” ~ Grumpy Old Men — it puts her to sleep at night –comfort and wisdom to sleep on. They are old friends preserved on film.

She guesses that she could put on the movie her mother left of her and her sisters’ growing years, but she thinks that would likely end in tears.

Is that boy still alive she wonders…?